Having just had a day without power, and then going round the site to check everything came back online correctly (including services such as water pumps, septic systems, freezers etc) I started thinking again about our wastewater system.

This is a Taylex envirocycle (septic tank + air blower + submersible pump in the final stage to deliver the effluent to 200m+ of dripper lines in a field). The "smarts" aren't really much - The power from the main switchboard comes in to a single outlet that has a 12v plugpack that powers the PCB, and on to a double outlet (with an overload trip) that powers an air blower + submersible pump. The blower runs 24/7 and has a pressure switch going to the PCB, and the pump cycles independently when it's float switch rises. There's a high-level float switch that triggers an alarm on the PCB, and that's about it. 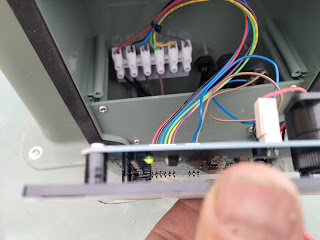 Something that integrates with Home Assistant and tells me:

All bar the last of these can be picked up from cabling already coming into the "controls" housing, but there's no way the existing system can pick up the pump-run sense. As all the pump cabling is pre-terminated I'd like to leave it that way, and I suspect the simplest method is to add a CT clamp over the active (live) cable in the double socket but that's likely to be very space constrained as there's also a circuit breaker in there. The plugpack is a switched mode DC one, so no clever voltage measurement at the same time to get accurate usage 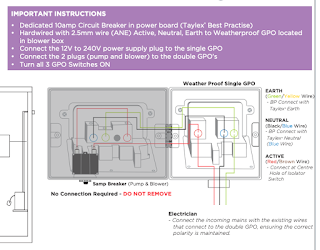 I think the best way would be to replicate the existing PCB (dimensions, pinouts, LED / mute placement) but add in something like an ESP8266 that can sit on our telemetry wifi network (signal strength down by the septic tank is good) and there's already plenty of options for integration (tasmota's trivial to customise)
This should keep me out of mischief for a while, as well as maybe being that "I should really learn KiCad" itch. 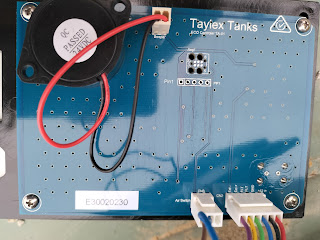 The obvious one is what about updates? ANY network connected device presents an attack surface if not maintained. Sure, I'm likely to keep stuff ticking over, but what about $future_owners? obvs, I won't be using a cloud service for any of this and hardware will be 'input only' so it won't affect the running of the system. What's the design lifetime for one of these units anyway? 20-30 years?
There's also the thorny issue of Certification - a one-off's going to be horrifically expensive to get any sort of certification for, and who'd install it? As Taylex's website states Please remember that by law, only licensed professionals are permitted to service and maintain on-site wastewater treatment systems.
Sigh. I suspect this may remain a pipe dream.
at March 15, 2022 No comments: