Some more background to my 'home assistant powered irrigation system' -- I'll write up a couple more articles as build progresses - I'm still waiting on some critical parts to arrive, like PVC pipe fittings and an Arduino Mega.

The Grand Plan.
The 2 main garden bed areas need to be automatically watered. The small 'hexagon' area contains 6 raised beds and a small central area. The main veggie patch (still being built. slow progress...) is around 20 beds. Later automation will include more smarts (hooking in my rainfall sensor, some buried gypsum sensors and soil temperature monitoring), but for now, the priority is to save on the 30-60 mins with a hosepipe in the evenings. Oh, and we're on tank (rainwater collection) water, so wastage is bad mmmkay. 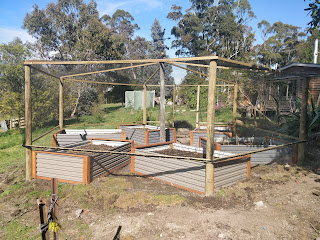 The irrigation units themselves won't be 'smart' - All they need to do is send valve (relay) status, and respond to controls. I have an internal MQTT message broker, so a basic arduino + ethernet shield + 8 channel relay board does the small bed, and an arduino mega + ethernet (or an ethermega) + 3 8 channel relay shields the main veggie patch.

Sample arduino code is available on GitHub, (functions? who needs functions...) and yeah, it's not elegant. While it follows the syntax for the home assistant MQTT switch device, some of the defaults aren't the same, so I need to explictitly set them for now in the hass config. such as

You can see here that I use status/hexIrrigation as LWT (so I know if the controllers on/offline) as well as the the relay state. I'm only using retain on the LWT, not the valves themselves. Power cycling the unit will (should!) reset back to all solenoids off, but I don't yet check and publish this, so hass may get confused if it loses comms. "Fixed in the next release" apparently :-)

I also want to integrate a flow sensor into each unit if possible (suspect I'm running out of digital IO on the small unit) to get an overall volume of water that's gone into the garden - fed, as normal into grafana.

I'll throw in another couple of postings (with pics) as the build progresses. but today I had an audience while working on the fence... (it will be fully netted to keep out the possums, pademelons and our hens) 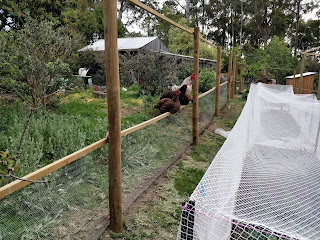