I've got the power

So, another "I should really get round to that" project that's worked its way to the top of the desk is repurposing a skip-dived server PSU (or 4) to be more usable. 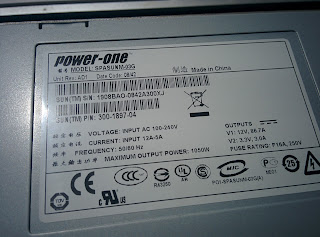 Since these were pulled from a bunch of servers, the output is a less than friendly set of three paired contacts for +12 and another set of three pairs or the ground. It won't start spitting out 12v when you plug a mains lead in as it needs the PS_ON connector bringing low. Power-one seem to gave been bought out by bel, and the datasheet is available here. 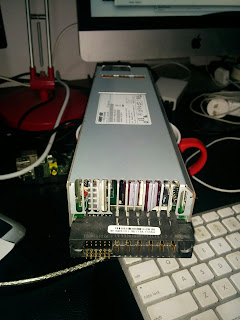 Rather than the (sometimes) crude way people have modified these and similar server PSUs over at RC Groups, I thought I'd hook up an arduino and be "smart"

This shouldn't be that hard, right? Arduinos can do i2c and I have a bunch of 3.3v ones to hand, so I can drive this off the stby 3.3v (even that's at 3A on this thing)

TO THE SOLDERING IRON! ... to be continued