Being the cheapskate that I am, I'm not buying a shiny apple-branded time-capsule for backups when I have a perfectly stylish NAS (since the pic was taken I'm using the via-eden board there's a 1.5TB HDD in the box)

I'd previously used netatalk with leopard under mythbuntu, but following a clean-up and migration to Fedora 16 (Verne) it needed reinstalling (esp as we upgraded to Lion on some of the macs)

So, a HOWTO if anyone is hunting for this and some notes

Here's what I did

The config files are in /etc/netatalk and (see the gude at An Esurient Trollop ) you'll need to edit afpd.conf
(I added -mimicmodel Macmini and uams_guest.so to -uamlist: I have a ro media share)

Now, onto the mac -- I wasn't seeing the host automatically appear in the finder, but a simple command-k (connect to server) and typing the hostname worked (it expands to afp://hostname automatically), and was prompted for my (normal) username and password to connect to $HOME on the netatalk server.

In the time machine preferences I could then select the remote TimeMachine volume on the NAS, enter my 'timelord' username/password combo and it started to so a backup.

So I finally got round to wiring in the 'Teleinfo' shield into my EDF meter (see my earlier post for more info) and left it running while we're away. Hacked up an initial couple of graphs using trusty gnuplot: exhibits A and B - 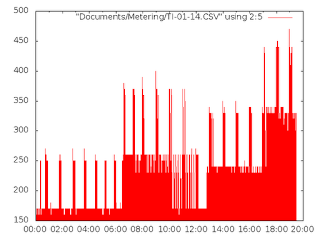 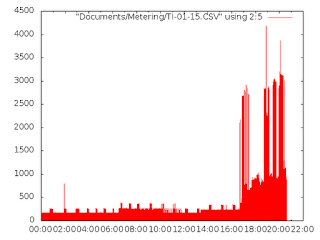 It's rather easy to spot where the fridge-freezer kicks in, but more worrying is the fact that the baseline never dips below 170VA. The only things that should have been running in that time was my via-eden server, with one HDD, the livebox and samknows monitoring box. I suspect I need to investigate more.

Made a minor hack to the shield as digi-6 is used by the LED on a nanode - but digi-7 is free.
Details were tweeted over here. Next up is to get it sending the info out to main box (well, another nanode or my bifferboard) and spitting to pachube and / or a jeelabs display board.
at January 15, 2012 No comments:

I finally got round to assembling my birthday present. Shiny toys FTW :-) 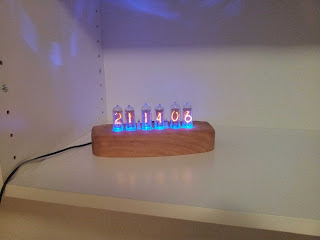