I've had fibre installed to the flat. In this area it's all organised by Reso-LIAin who have 'local' ISPs who resell their network. Luckily for me one of the PoPs is located at work so I have nice small (<2ms) pings to site.


So what's involved? Choose your ISP from the shortlist (of about 5) -- all roughly the same prices, some offering more bundled stuff at cost. I ended up with 'k-net' (formerly known as kwaoo.com). They seem to be rather dependent on one supplier if you look at their AS24904. Contractors from reso-lian show up to pull the fibres into your property -- In my case they'd already run multicore into the building (1st and 3rd floors had breakout boxes installed) and I was the first to get it from there. They pull (through the france telecom duct -- which should be installed anyway) a 2-core fibre and terminate it at the CPE (which must be powered, so you have to define a location within reach of a wall-wart. They will put the CPE up to 5m from the france telecom entry point, in my case I asked for it in the walk in cupboard. Being an old flat, the duct was smaller than current Normes (building standards) and partially blocked. when they repulled the phone cable (in use for ADSL) they managed to snap it. It now leaves the duct at floor level rather than in the patress. Hmm. 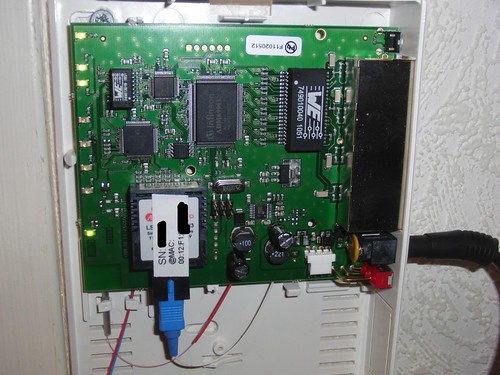 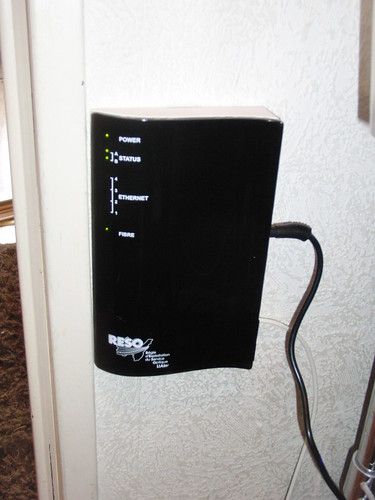 The 4 ethernet ports are split from 2 vlans - ports one and two carry 'internet' traffic - you give the MAC address of your router (I purchased my own) and they put it in the DHCP server. (you get a static IPv4 address). Ports three and four are for the IPTV service. This is multicast and although they supply a set top box, I've not bothered renting one, as I'll just watch it with VLC instead. Status of the TV streams is available (from reso-liain) at http://81.18.191.108/tv/liste_tv.html (found via their forum).


Phone service is VoIP -- They will port your existing number (this is the only resason my freebox is still active - am waiting till thats done before cancelling service) and will sell or rent you an ATA. Since they send config details in the mail, I shall use my polycom and if brave the SPA3102.

Disadvantages: No IPv6 yet. boo. Especally as I was used to having it with free. Other than that? I've only mailed specific tech Questions at their helpdesk and theyve been OK (such as can you set reverse dns to ...... -- which they do :-)

Email ThisBlogThis!Share to TwitterShare to FacebookShare to Pinterest
Labels: FTTH

Not that I tend to err, leave things till last possible minute or anything, but I'd really like to have a tracking system on the CERN shuttle busses, so that I can stay in the office until I know the bus is coming. (or, armed with a mobile device waiting at the stop, see where it is)

So - I was thinking something embedded ish that contained a cheapo GPS chipset (probably good enough signal on the dasboard, a 2 line LCD and a keypad