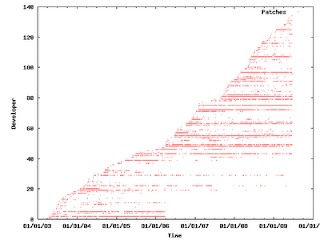 As an aside I recently looked at a piece of GPL'd software and analysed the subversion stats for it.
Each datapoint represents a checkin to the tree and I assigned a numerical ID to each ssh account. shows which developes 'stick' with a package and which abandon their updates.

I've been a happy Ubuntu user for a while on my HP Compaq 8510p laptop, but a few things recently really started annoying me.

1) regular ubuntu system upgrades don't include openafs-modules for that kernel, which means I have to recompile and install them before I can access cern.ch AFS space.

5) ... neither did userfriendly xinerama.

OK, so most of these problems are caused by the video driver (closed source fglrx) but since Fedora 11 came out I thought I'd compare and see what the opposition had (especially useful since I use RHEL clones at work - scientific linux 5 or 4)

Installer -- worked wonderfully *once I'd managed to get the iso onto a USB stick -- I was using unetbootin (on Jaunty) but I hadn't formatted the stick as fat32 -- didn't work with an ext3 formatted stick. The LVM selection was a bit fiddly (I have /boot(sda1) and linuxvg(sda2) and within the VG I have homelv,rootlv and afscachelv (was ext2 as I used XFS for / and /home)

F11 wanted me to migrate from xfs to ext4 for / -- OK not an issue, but its SElinux policy seems screwy wrt the /home

I get home directory does not exist, logging in with HOME=/
but then can immeadiatly cd to $HOME. harumph.

also the Fan runs constantly, so battery life is low, Especially since it suspends as soon as *one* of the batteries goes flat (see bug 220962)

in short, Fedora 11 fixes some of my issues. looks really nice, but just doesn't do what I want (*decent* laptop distro that lets me work for a long time). So I'm afraid I shall revert to Ubuntu over the weekend - it's still buggy for me, but in less critical ways (hopefully a fresh install of 9.04 will blow away any issues of the video driver rather than the upgrades.

Maybe again in Fedora 11.1 ?
Why not windows? well, I *like* using the CLI for most of my work, Putty + gvim + development languages are good but I'd need a virtual machine to test any linux stuff out on laptop. I don't actually have a need of any windows-only software, so why pay the licence.