We have a cheapo Chinese incubator for hatching eggs. According to popular Internet postings, the calibration of the 'temperature setting' on the front vs reality inside isn't terribly accurate. Since I have a stack of 'Ruuvitags' (https://ruuvi.com) from their kickstarter, I decided to put combine them with Grafana so I could start logging the data and plotting trends.

First up, by default they broadcast an Eddystone beacon, so that you can simply see the data on a phone / tablet (via the Physical Web), however with Google dropping this feature, I decided to switch them to Raw mode which has a higher accuracy. This is done by simply opening the tag and pressing the 'B' button to toggle between Raw (LED blinks red) and URL (LED blinks green) mode.

I'm using a Raspberry Pi 3 as a Bluetooth receiver. Running Rasbian 9 (stretch) means that I get a recent (v 5.43) version of bluez which understands BLE. Although there's a Java app to push to influxdb, I'd rather use Python, so pip-installed the ruuvitag_sensor package.

Initially this worked 'OK', but the logs were full of noise on the listener, so I hacked up a quick script based loosely on the examples. When done, it was much cleaner than the original and was picking up more of the broadcasts.

Once again, trivial to add to influx with some templating 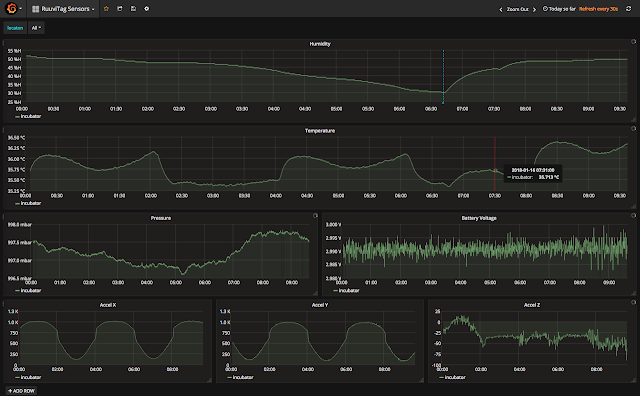